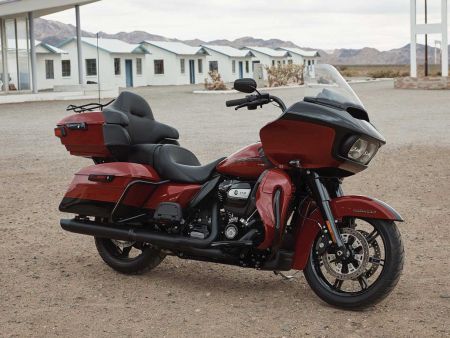 Harley just announced the first wave of new entries for its 2020 lineup, and between the electric LiveWire and cool new Low Rider S, you may not have noticed that there's also a fresh Touring model this year. Making the scene for 2020 is the new Road Glide Limited, which replaces the Road Glide Ultra. Not surprisingly, it soldiers on in the same Grand Touring tradition as its dearly departed brother, with a host of premium luxury features to accentuate its two-up, long-haul bona fides. In fact, it's almost splitting hairs to find the differences between the outgoing Ultra and the new Limited model, so we'll try to sum them up here.

Down below though is the same unmistakable Road Glide platform riding on a 64-inch wheelbase with 49mm fork legs with Dual Bending Valve tech and a frame-mounted shark-nose fairing carrying a touring screen and super-handy triple split-stream venting. You get those wickedly efficient dual Daymaker LED headlamps just like on the Ultra, while an easily adjustable rear shock below the seat lets you fine-tune your preload for a more compliant ride. The Reflex electronically linked four-piston Brembo brakes with 300mm discs carry over as well as standard-issue equipment.

Warm your digits with the included heated grips (which offer six settings), and stash all your crap in the roomy Tour-Pak luggage carrier for those long multiday jaunts. You’ll see the same super-smooth Milwaukee-Eight 114 engine on the Limited, also Twin-Cooled for maximum efficiency. The Boom! Box GTS infotainment system with full-color TFT touchscreen (upgraded last year) gives you super-fine clarity and easy access to tunes, navigation, and phone ops, as well as vehicle data.

The 2020 RG Limited also comes with cruise control, factory security, and, as we mentioned, ABS as standard features, and also comes with H-D’s Connect service (which works with the Harley-Davidson app) free for the first year, should you want to stay tethered to your bike even from a remote location to access key vehicle info as well as monitoring its security. The RG Limited’s wheelbase, rake, and seat height are all the same as the outgoing RG Ultra’s but somehow the Limited rings in 5 pounds lighter.