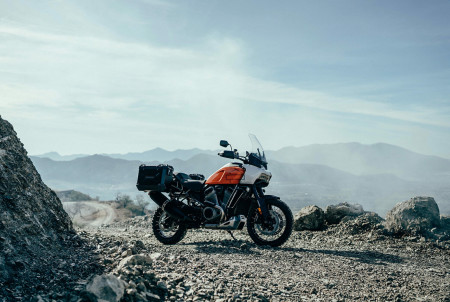 Ask the average person on the street to name the first motorcycle company they can think of, and odds are pretty good they’ll say “Harley-Davidson.” Indeed, the 116-year-old Milwaukee-based bike maker is one of the best-known brands in America, period — an icon right up there with Coca-Cola, Disney and Chevrolet. Yet in spite of its long history, expansive reputation and wealth of models past and present (including a game-changing electric bike), Harley has never sold an adventure bike…until today.

The 2020 Harley-Davidson Pan America adventure touring marks the motorcycle maker’s inaugural foray into the ADV category, serving up Wisconsin-made on- and off-road capability designed to let riders tackle all sorts of terrain and navigate wherever their heart desires. Brembo and Michelin teamed up with H-D to work on the brakes and tires, respectively, to make sure these vital components were optimized for this ADV’s skill set.

At the Pan America’s heart lies Harley’s newest V-twin powerplant, the liquid-cooled Revolution Max. The burly 1,250cc engine cranks out at least 140 horsepower and north of 90 pound-feet of torque, ensuring this ADV has the grunt to leap over or blast through practically anything man or nature can throw at it.

The Pan America is also joined by Harley’s new streetfighter bike, the 2020 Bronx. It too uses the new Revolution Max engine, albeit in smaller 975cc form. Unsurprisingly, the Bronx isn’t quite as powerful as its adventure bike sibling; Harley says it makes “more than” 115 horses and 70 lb-ft. Still, it’s more than potent enough to provide some serious thrills when you hit a stretch of winding road, and ain’t that the point?

If you like what you see here, well, you’ve got some time to start saving up. Both motorcycles won’t hit dealerships until late 2020, which means we could be as much as 12 months away from tackling trails on the first Harley ADV. Still, we’ve waited this long…what’s one more year?