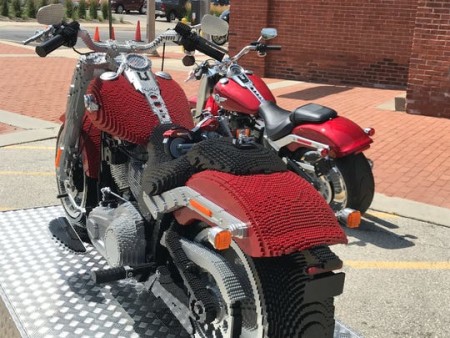 A partnership between Lego and Harley includes life-size Lego Harleys and an event for kids Nov. 2-3

Legos and Harleys have a few things in common.

They're both fun to build.

And kids and grownups are both interested in them.

That's why Nathan Kolbe, marketing lead for Harley-Davidson, was excited to engineer a partnership between Harley and Lego, a relationship that started in July and is expected to extend through 2022.

Kolbe said the partnership kicked off with a product launch this past summer — of a 1,023-piece Lego replica of a Harley Fat Boy motorcycle.

"The kit is part of the Lego Creator Expert line, and Lego did a great job including a lot of really cool detail with it," said Kolbe. "There's the famous teardrop gas tank, plus the wheels that are iconic for the Fat Boy, along with the wicked red color."

Lego’s new plant-based pieces pave the way for complete sustainability for the company by 2030. Buzz60’s Tony Spitz has the details.     Buzz60

Lego and Harley also worked together to build three life-size Fat Boys. The models, which are built from more than 70,000 Lego pieces, have been traveling the world for the past few months. One of the Lego models started out at the Harley-Davidson Museum in Milwaukee, is currently at the Lego store at Mall of America and will be traveling to the Lego Store in Orlando's Disney Springs later this year.

"They'll continue to travel through 2019 and 2020, and the goal is to eventually have one of them on permanent display at the Harley-Davidson museum," said Kolbe.

The next part of the Lego-Harley partnership is an event on Nov. 2 and 3, when kids (and grownups) are invited to come to the Harley-Davidson Museum to help build a Lego mystery mural.

Each visitor will be given a square base plate and 36 Lego bricks, along with instructions for where the bricks go. Staff members will be available to help if needed, and, once the bricks are placed on the proper places on the plate, they can add them to the designated place on the mural.

While Kolbe can't divulge what the mystery mural will show (obviously), he said people who have worked on mystery murals in other locations always have fun making their guesses.

"As more and more people go up to the wall, people can start to see what images are being revealed, and they'll start to make their guesses," said Kolbe. "It's fun because, as you build out more of it, people start to take pictures and put them on social media, and everyone says what they think the mural is."

All kids (ages 17 and younger) will get free admission to the museum that weekend. Here are some other activities they can look forward to: